Suzanne is trained as a hand bookbinder in Lausanne and Sion from 1988 to 1992.

In 1992/1993 she attended a year long advanced training program at the CBL under the direction of Edwin Heim.
Between 1994 and 2007 she continued her advanced training in different countries with other well known professionals such as: Hedi Kyle, Peter Aegerter, Jean-Luc Honegger, Sün Evrard, Carmencho Arregui and Pamela Moore.

From 1996 until 2005 she worked in Barcelona as a free-lance bookbinder running her own workshop.

During that time she also taught courses in her studio and at schools throughout Spain.

In 2005 she moved to Milan, Italy where she continued her free-lance work as a fine binder and taught nationally and internationally.

As the director of the CBL, Suzanne traveled worldwide to participate in fairs and exhibitions and as a guest lecturer.

Suzanne will do a Summer master class here in July 2023. 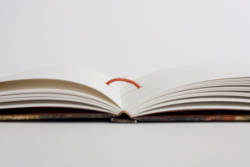